AoR 92: What Hath Ocean Currents To Do With Colorado Cattle? with Derner, Augustine, and Raynor

Art of Range · AoR 92: What Hath Ocean Currents To Do With Colorado Cattle? with Derner, Augustine, and Raynor 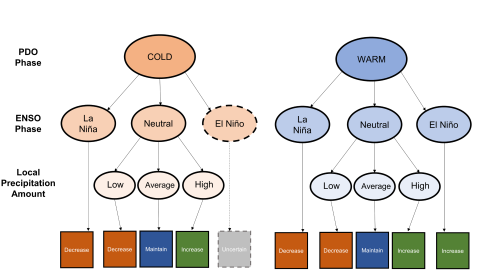 The giant bathtubs off the western and southern coasts of North America contribute large amounts of heat and moisture to the continent, driving much of the climate (long-term) and weather (short-term) of the Western United States. And oceans have regular oscillations in temperature, which drives moisture delivery. Researchers looked at historical yearling cattle production data going back to 1939 at the Central Plains Experimental Range to see whether correlations existed between the Pacific Decadal Oscillation and the El Nino Souther Oscillation and cattle performance. Interactions between the PDO and ENSO have an effect on both rangeland production and livestock weight gain. Listen to this panel discussion with Drs. Justin Derner, David Augustine, and EJ Raynor to learn more.

Other publications by Justin Derner and David Augustine.

Future podcasting funding depends on listener feedback. Please take a minute of your time to respond to this short survey.